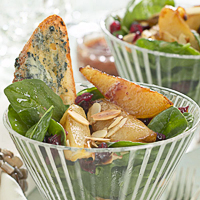 Directions:
Place rack in the middle of the oven and preheat to 450˚F. Grease a small baking sheet with butter. Peel and core pears and cut each one into 8 wedges. Toss pears and sugar together in a bowl and place on the buttered baking sheet, cut sides down. Roast for 15-20 minutes, or until soft & browned on the under sides. Transfer pears to a piece of waxed paper and let cool completely. Toast the almonds on a baking sheet for 3-5 minutes, or until lightly browned. Transfer to a small bowl to cool, stir in ½ cup cranberries. Make the blue cheese toasts: Reduce oven temperature to 400˚ F. Cut each slice of bread in half, so you have 16 halves. Brush both sides of each piece with some of the oil, and toast on a baking sheet for 3 to 4 minutes per side, until lightly browned. Remove from the oven, and divide the cheese between the toasts, crumbling the cheese up as you go. Return the toasts to the oven and bake 4-5 minutes, until the blue cheese has melted. Arrange spinach greens on a platter or on individual salad plates, and garnish with nuts, cranberries, roasted pears, and blue cheese toasts. Drizzle with Stonewall Kitchen Cranberry Ginger Dressing. Serve immediately.